Bhutan has recently gained its reputation as a new, promising travel destination in South Asia. The world’s happiest country attracts tourists with its natural beauty, ancient monasteries, traditional celebrations, and kind hospitality. Moreover, travelers to Bhutan are welcomed to engage in various activities such as exploring colorful towns, trekking to grand mountain ranges or meditate in the serene monasteries. To prepare you for one of the best Asia tour packages, we have made this list of the best things to do and see in Bhutan.

Top Wonderful Things to Do in Bhutan

It would be a mistake if you miss a chance to go to Taktsang Goemba – the Tiger Nest, one of the most iconic attractions in Paro – Bhutan. The multi-level monastery complex lies hanging to a sheer cliff which is thousands of feet above the ground. The unique architecture makes this site renowned worldwide. However, the destination has not been overrun by tourists, thanks to the government’s restrictions on visitor numbers and the difficult journey to get there. 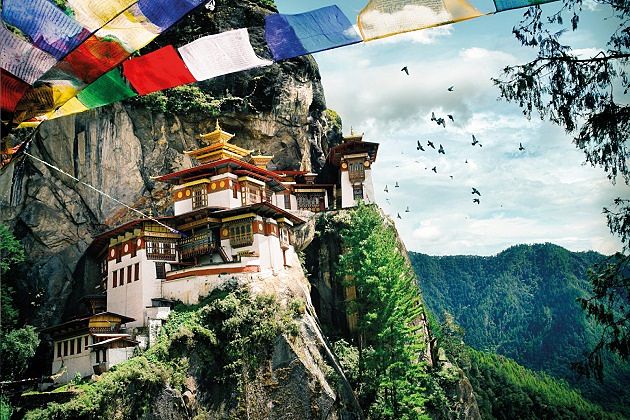 Visitors have to hike through steep, rocky tracks for 2 – 3 hours to reach the monastery. Consider this before you go if you have health problems such as vertigo, abnormal blood pressure, cardiac disorders. But of course, those who are able to reach the Paro Taktsang will be awarded magnificent scenery of the valley and sacred aura of the 300 years old monastery, an experience like nowhere else on earth.

Archery is considered the most important sport in Bhutan and its biggest enthusiasm. The game is rather simple with men taking turns in shooting arrows at a target positioned about 140m away. You can recognize the competitors by their multi-colored throngs and Bhutanese men’s’ traditional patterned robes called “ghos”.
What makes these competitions even more entertaining is the cheering and celebrating of the locals. On the sidelines, beautiful women put on their finest silk gowns to dance in circles while cheering for their team. And when it is their opponents’ turn to shoot, they would make a loud noise as a way of distraction and mockery. 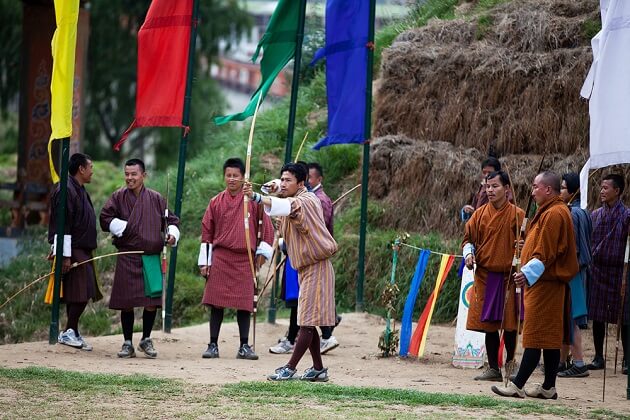 During religious activities, local celebrations and national holidays archery games will take place throughout the nation. Among them, the biggest is the Coronation National Archery tournament and Yangphel tournament. Travelers can have the chance to participate in the game if they visit small local competitions or specialized workshops.

Tsechu festival is one of the biggest festivals in Bhutan, which is celebrated on the tenth day of any Tibetan month, depending on the region that organizes it. The locals love this festival as it is a great opportunity for them to meet friends and relatives, to be amused and to be blessed. Visitors to Tsechu will be able to see distinctive, colorful and interesting traditional Bhutanese cultures. 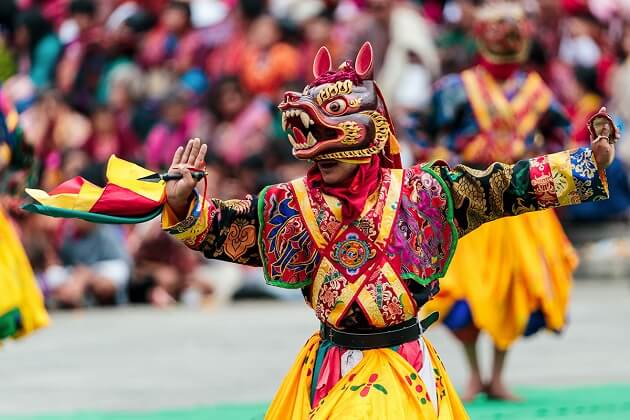 One of them is the Cham dance, which is considered a highlight of the festival. During which, the monks and laity would put on colorful costumes, scary masks and perform lively dance moves.
The dances tell the victory story in the life of Padmasambhava – an 8th-century Buddhist master, and will bring the local with luck and enlightenment. Travelers can also enjoy the Bhutanese folk festive music that is played from cymbal, drum, yak-horn, and flute. Among all the destinations, the five-day Tshechu in Paro is the biggest in Bhutan. It is celebrated in the second month of every Bhutanese calendar around the grand Paro Dzong.

Understand the Meaning of the Phallus in Bhutanese Culture

Considering a religious and moral Asian country, the abundant phallic images and decorations in Bhutan are one the most bizarre sight for foreign travelers. The best destination to witness this oddity and learn about its origin is the Chimi Lhakhang, a temple dedicated to the Divine Madman name Drukpa Kunley. He is famous for teaching Buddhism while still praising the importance of sex. The phalluses in Bhutanese culture are considered to bring fertility and have the power to scare away evil spirits.

The Chimi Lhakhang is a popular pilgrimage site for couples who are expecting to have children. There, the blessing ceremony will be performed by a monk using a wooden phallus to gently hit on the head of the women pilgrimages. Around the area near the Chimi Lhakhang, visitors can also see houses and houses decorated with phalluses. Either it is huge paintings on the walls, hanging outside the doors or placed on the dining table, you’ll get used to them after a while. 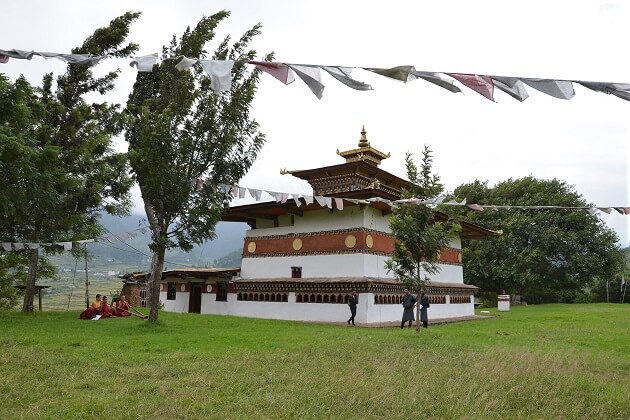 For certain, this is one of the best things to do in Bhutan. If conquering the challenging Himalayas is your dream but you also want to look for an off-the-beaten-track journey, hesitate no more and head straight to Bhutan. It is also a good place to go if you just want an easy trek to enjoy nature and local life because Bhutan offers numerous interesting short treks all around the country.
In order to maintain strict regulation on tourism, the Bhutanese government requires that all trek routes be managed by local agents. Travelers taking trekking tours will be accompanied by a guide, a cook, a camping assistant, and horses. 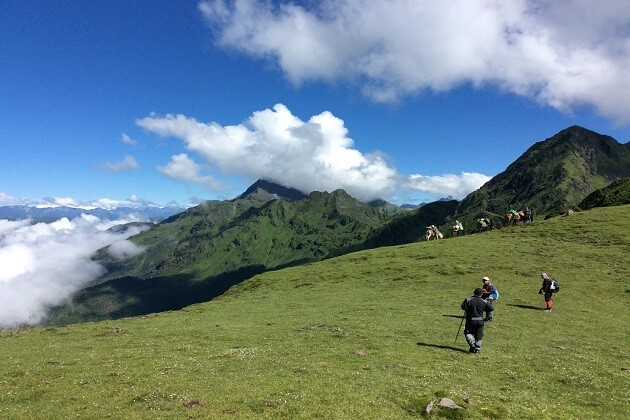 The Jhomolhari trek is one of the most popular treks in Bhutan. In the past, it used to be an ancient trade route. Taking this trek, tourists will have the chance to reach Bhonte La pass 4,890m and Takhung La pass 4,520m. The Jhomolhari trek also includes a view at the grand Jhomolhari mountain which is about 7300 meters tall.

Learn the Traditional Arts and Crafts of Bhutan

In a country where “happiness” is considered as the most important goal to achieve, great efforts have been put into conserving and honoring traditional arts and crafts. In Thimphu, there is a special institute called “National Institute for Zorig Chusum” that teaches these art forms and travelers are welcomed to come to visit and watch the students practicing their delicate skills. The students here are also very friendly and they would love to answer what you want to know. 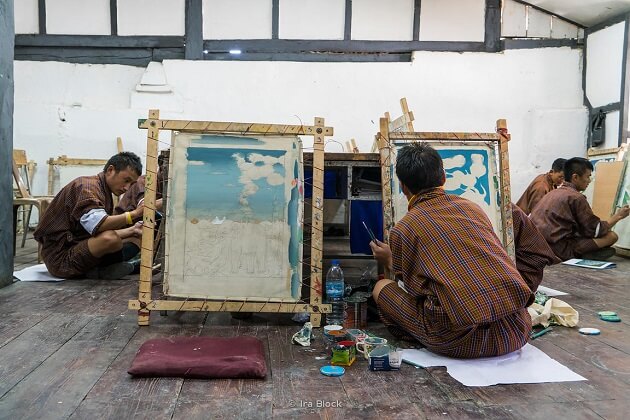 The 13 arts and crafts of Bhutan are various and sophisticated, they include calligraphy, painting, sculpting, metal casting, woodcraft, etc. All of which were kept from the 17th century and represents the traditional spiritualism of the country.

Best Places to Visit in Bhutan – Destination to Go

It is not complete to visit Bhutan without a trip to the capital city Thimphu. Located in a lovely valley next to the Wang Chhu River, this is the biggest center in the country for government, religion, and commerce. Thimphu is the perfect place to spend time on your tour packages in order to immerse yourself in a combination of modern and traditional Bhutanese life. 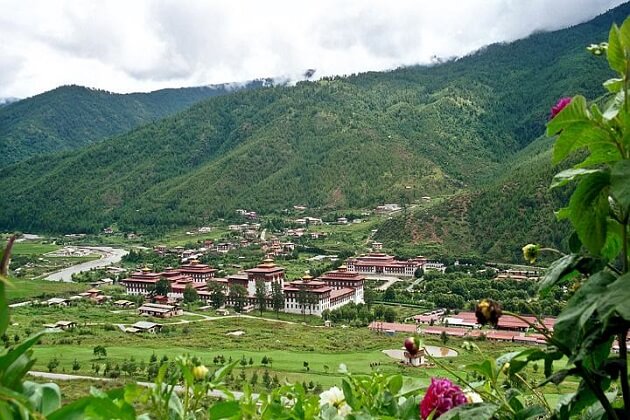 Thimphu was declared as the new capital since the middle of the 20th century. Other than the pretty nature and useful amenities, Thimphu also has its uniqueness such as no traffic lights but police controlling the traffic instead.
Other than the National Institute for arts and crafts mentioned above, visitors to Thimphu can explore a lot of ancient temples, busy markets, and monasteries.

Paro is famous for being a beautiful city with diverse architecture and nature. While in here, to get the best view of the entire Paro valley, head toward the magnificent monastery called Rinpung Dzong. For the rest of the day, you can head back to the city and enjoy various activities such as hiking, mountain biking, and rafting. Paro is also the favorite destination for travelers who look for a tranquil experience as they can meditate in the clear sunlight between the splendid mountainous view. 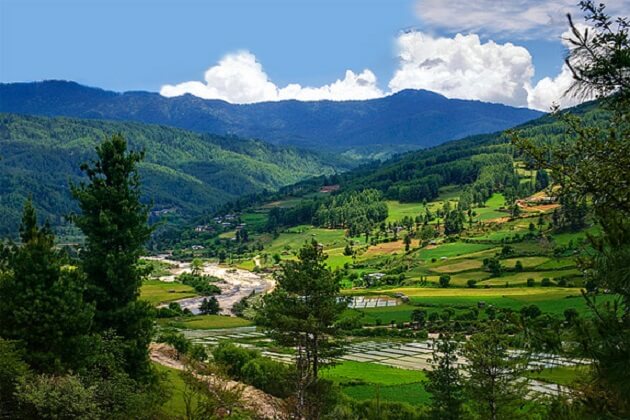 This Himalayan town receives water and fertilized the soil for agricultural activities from the two main rivers of Bhutan, the Pho Chu, and Mo Chu. Before Thimphu, Punakha was once the capital of Bhutan. During that time, a glorious fortress named Punakha Dzong was built. Nowadays, it is still as magnificent with white-washed walls and intricate multi-layered roof and attracts visitors all around the world to come and admire. As you walk through the empty hallways, you can also enjoy the calming sound of the rivers nearby. After visiting the famous dzong, go to Khamsum Yuley Temple to get a taste of Bhutanese arts and history. With numerous colorful paintings and murals, this destination is often named for a “must-see” when visiting Punakha. 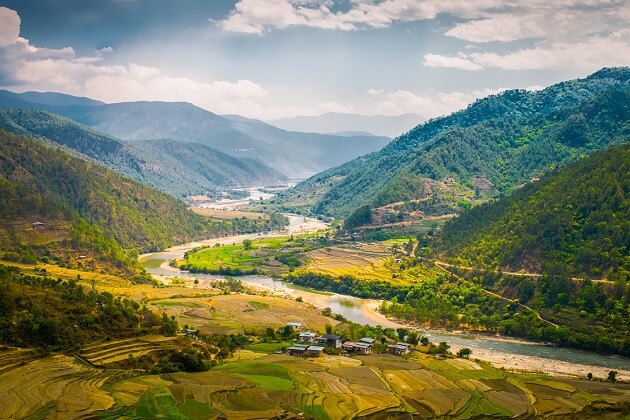