Festival and celebration seasons are the perfect time to visit a country and get an insight into their cultural heritage and obviously, Cambodia is not an exception. With multiple festivals happen throughout the year, Cambodia is an ideal place for you on the way of getting into the fascinating Asia travel packages. If you want to see how Cambodians celebrate their New Year or watch a competitive boat race on the Water festival, check out our list of Cambodian festivals to plan your trip here.

Magha Puja is the second-largest Buddism festival in Myanmar. It is the occasion for thousands of monks and Buddhism to commend that moment in history when Lord Buddha conveyed his message to more than a thousand followers at Rajagaha Valuwan Vihara. The place is also where he later withdrew. Magha Puja denotes the start of all the religious celebrations in Cambodia. The Theravada Buddhists assemble in a parade in a pagoda in Khlong Luang. In the morning, they would pray, meditate, pursued by revolving around the focal altar twice with religious offers such as incense sticks, candles, and blooms. Magha Puja happens on the full moon day of the third lunar month in the Khmer calendar, which usually falls into the lattermost part of February. 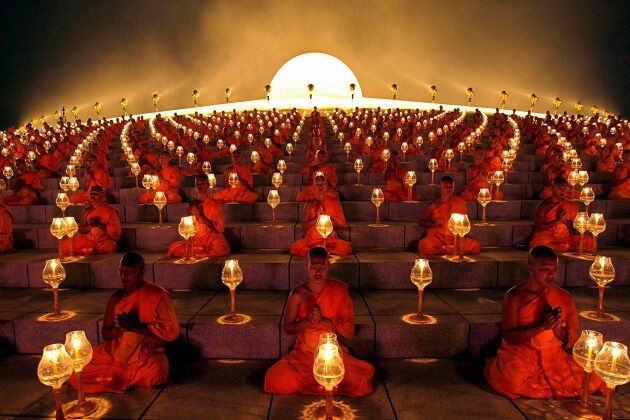 During their Khmer New Year, Cambodian take a break from work to celebrate the most special time of the year. The holiday draws families together from the whole way across the nation then turned into a festival that is wet and wild on the third day.
On an initial couple of days, Cambodians will clean house, make nice food offerings for the monks in their neighborhood, pray for luck and peace at pagodas and temples, and for the young, they play fun and exciting traditional games with friends in small festivals.
On the last days of Khmer New Year, likewise with comparable new year festivities in Laos and Thailand, everyone joined in an amusing water splashing game with the purpose of bringing luck and fortune.
Chaul Chnam Thmey is celebrated from April 13 to 15 every year in the Gregorian calendar, not the lunar calendar like other festivals. 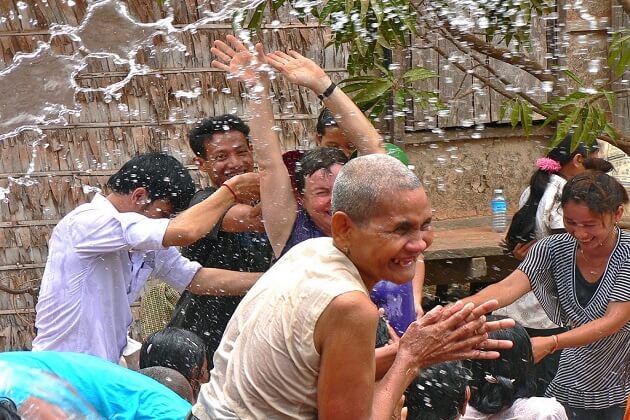 Pithi Chrat Preah Neanng Korl is a religious, traditional ceremony denoting the start of a new agricultural season in Cambodia. On this day, a representative of the country’s royalty marks the beginning of the ceremony by plowing with the royal buffalo. After that, they will offer the animal with staples and make a prediction about how the coming season will turn out base on what the buffalo choose. Even though the ceremony is the result of traditional supernatural belief, the Cambodian nowadays still believe that it can provide bumper crops and protect the country from natural disasters. Pithi Chrat Preah Neanng Korl takes place in a big field next to the Royal Palace in Phnom Penh on the fourth day of the sixth lunar month, which is usually the last of April or the beginning of May. 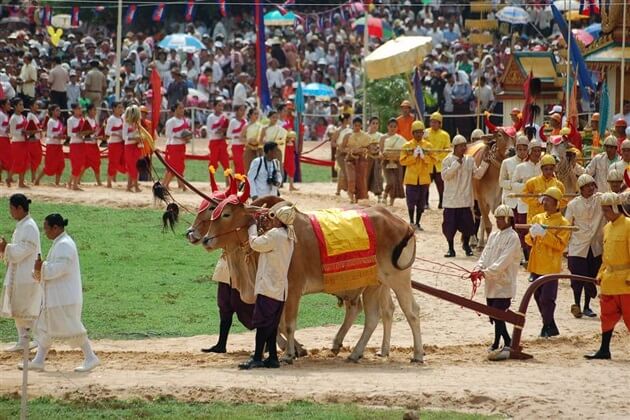 Every year, on the day of the Buddha’s birth, Cambodia celebrates Visak Bochea Day. As a country with great influence from Buddhism, Visak Bochea Day is one of the biggest public holidays in the provinces and towns of Cambodia. All Buddhists, particularly elders, go to pagodas on this day to join monks in learning about the Buddha’s trip. The ceremony takes place in sacred sites or anywhere with water until the evening when the observance place floating lanterns and illuminated boats to wish for delight.
Visak Bochea is celebrated on different days in different Asian countries. In Cambodia, it usually takes place in April or May. 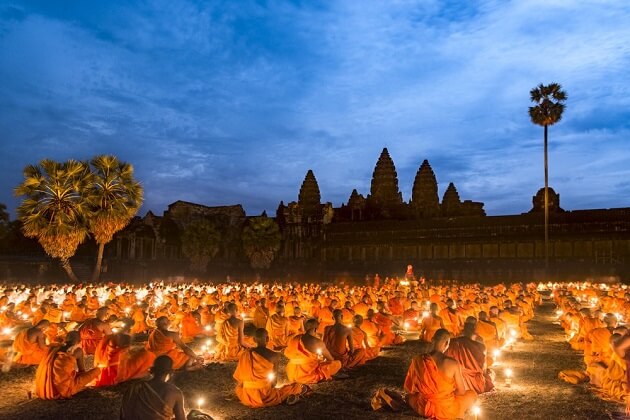 For the Cambodians, this holiday is very essential as it reminds them of the result of Khmer Rouge and Pol Pot when there was no government with restricted powers. 14th May is celebrated on King Norodom Sihamoni’s birth and coronation ceremony. The King celebrates his birthday merely by offering offers to the monks and the needy of the country, but the state celebrates his birthday with a three-day holiday (from 13th May to 15th May) over which people dance on the street with banners and billboards to congratulate the King. 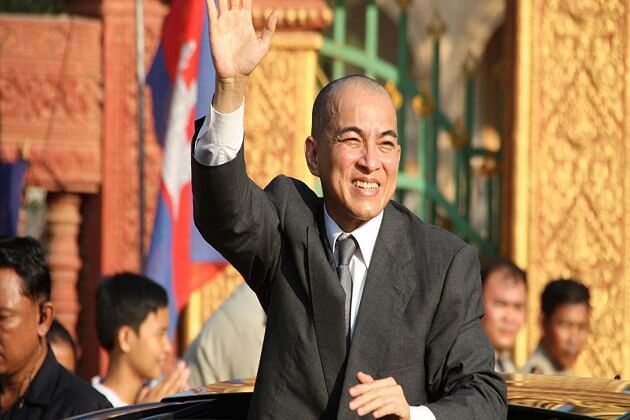 Pchum Ben – Festival of the Deceased

Pchum Ben, or the Khmer Festival of the Deceased, is, in fact, the culmination of a 15-day religious practice called Dak Ben. On the first day of this festival, it is believed that the gates of hell are opened and that all the spirits are released to return to the normal world. During the festival, Cambodian will visit at least seven pagodas. There, they will create offerings to dead ancestors and light candles, which will lead the way for the spirits of the deceased to these offerings. Observant Cambodian will also go to temples and throw on the grounds a mixture of rice and sesame. The purpose of this observance is to feed the souls of the deceased who are traveling around the ground on Pchum Ben and are hungry from not having eaten all year long. This holiday is particularly meaningful to the offspring of those murdered by the Khmer Rouge, who often go to pagodas that keep the remains of the unidentified victims to pray. On the 15th day of the 10th month of the Khmer lunar calendar, Pchum Ben is celebrated, which is usually in the latter part of September. 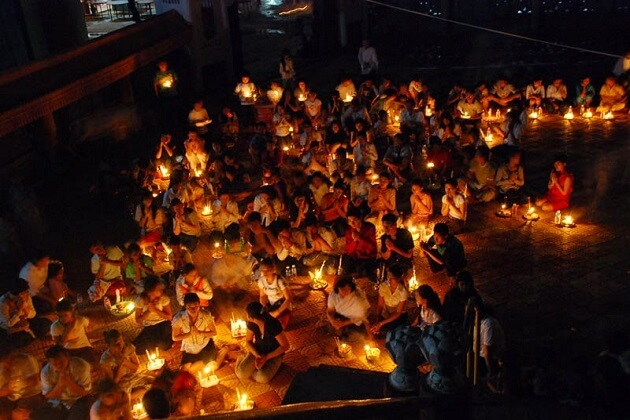 November 9th is Cambodian National Day. Since 1953, Cambodia’s freedom from the French colonial period has been celebrated annually on this day. The festivities focus around Phnom Penh’s Independence Monument, where the King light a winning flame in the presence of leaders, commanders, and officials in the country. Cultural events, Norodom Boulevard parades and evening fireworks are also part of the event. 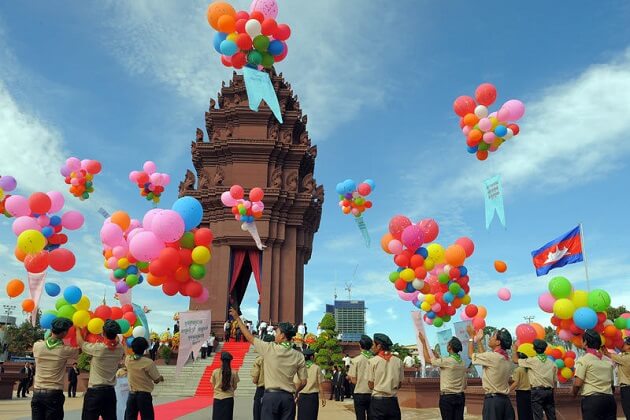 The Cambodian water festival is a splendid traditional event celebrated in Phnom Penh every year. The history of the Cambodian Water Festival stems from the 12th century when the Cambodian Navy fought for Cambodia freedom and the festival is a respectful tribute to them. It is celebrated night and day in the capital city with all Cambodian and visitors from abroad. During the event, which was previously a combat practice by the marine forces, there will be a boat racing activity.
The Water Festival is celebrated on the 15th day of the 12th month of the Khmer lunar calendar, which is usually the latter part of November. If you are interested in visiting Cambodia for this festival, make sure to check out the news in case the authorities cancel the festival. 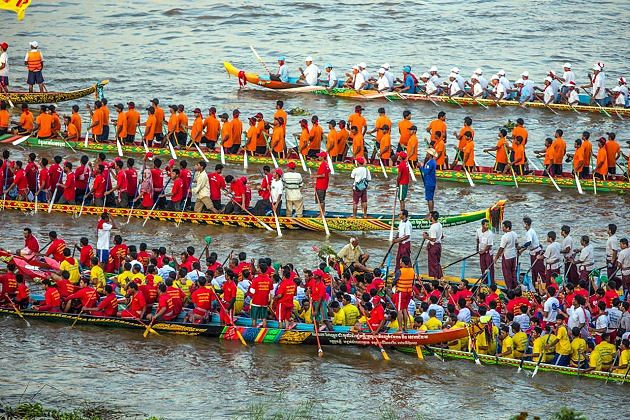 The Angkor festival is a very cheerful activity in November or December every year. This event is attended by many officials and the king himself sometimes. Performances are created by talented artists all over Asia with inspiration from epic stories of old myths. Each performer carries their traditional clothes that recreate historical moments and dance to the fun and festive music. And finally, the magnificent location, Angkor Wat is the final factor to make a perfect experience for the visitors of the festival. 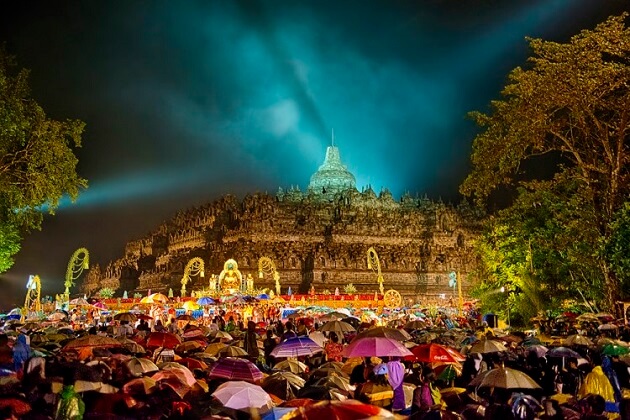 Each year in December one of the four Cambodian coastlines celebrates the national sea festival. Since 2011, this event has been organized for visitors, with various sports activities including motorboat competition, swimming, beach volleyball, half marathon, and martial arts. The festival is held throughout the day, from the early morning and continues until the dark. The Cambodian Sea Festival is a joint project of the Cambodian Ministry of Tourism, the Minister of Fine Arts and Culture, and the Cambodian National Olympic Committee. In Cambodia, Kep Province will be hosting the 6th Sea Festival. 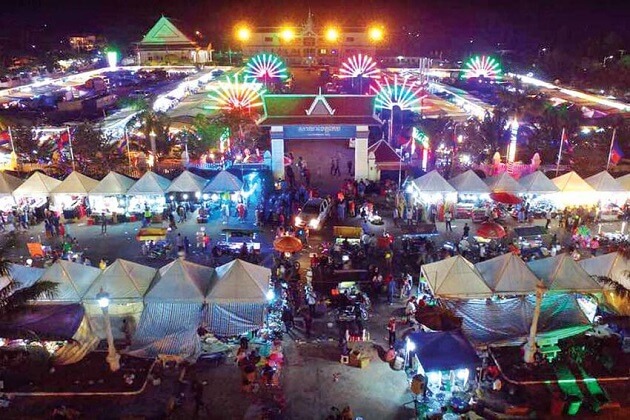