Prior to my delighted Asia vacation packages, my perception of Myanmar is just a simple destination with lots of pagodas and untouched natures. I have to admit that I didn’t study much about Myanmar before I go. But maybe that is exactly why I felt so amazed by the country when I was there. Myanmar is such an exciting destination in terms of natural scenery, cultural background, and exhilarating lifestyle. To prove my statement, I will give you a list of the most interesting fact that I notice while enjoying my time in Myanmar. I am pretty that after reading these, you would immediately want to book a tour there.

The Shwedagon Pagoda in Yangon, Myanmar holds thousands of visitors a day. For foreign tourists, the pagoda is attractive for the golden beauty and intricate Oriental design. But for the Buddhist, there is something much more special about this place. The pagoda enshrines a collection of holy relics, and most importantly, eight strands of Gautama Buddha’s hair. 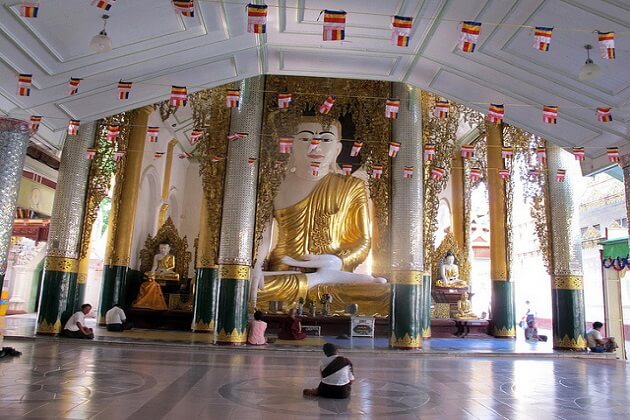 There Are Loads of Diamonds in Shwedagon Pagoda

Just when you thought covering the entire outside of a complex of pagodas and stupas with gold is enough, the Burmese went the extra mile and coat the top of Shwedagon pagoda with more than 4,500 diamonds. The biggest diamond itself, which sits on top of the pagoda, is mesmerizing with the size of 72 carats. 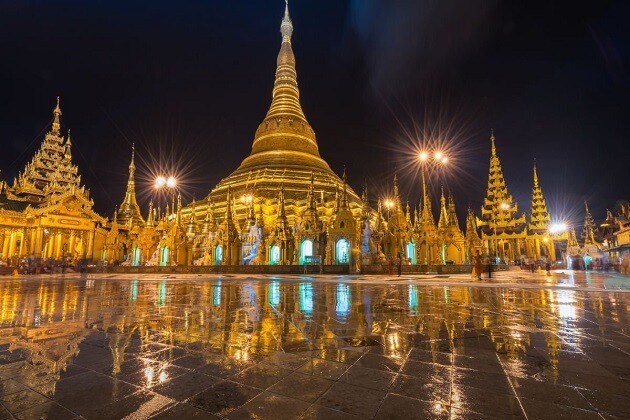 Yangon is Not the Capital Anymore Since 2006

Foreigners are not the only one who is surprised by this fact. In reality, the Burmese also weren’t aware of this because building the new capital is a secret governmental project. The country’s new capital is relocated to Naypyitaw, which was once an empty countryside. Right now, it is a 7,054 square kilometers city, roughly four times the size of London. But the town has struggled to attract Burmese residents or a significant number of visitors despite billions in investment from the state.

Burmese Cuisine – Things to Know Before Going to Myanmar

The Burmese Don’t Just Drink Tea, They Eat It

The Burmese use tea to create their signature dish lahpet thohk – tea leaf salad. This is the perfect example to show how creative Burmese cuisine is. The fresh tea leaves are fermented and mix with other types of vegetables and beans to neutralize the flavor. This is a must-try dish for every travellers in Myanmar. 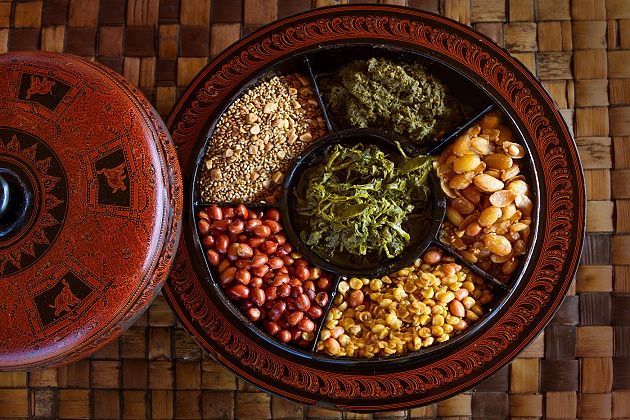 Chewing betel is one of the longest traditional habits in Myanmar. The product is prepared by combining betel leaf with areca nut. The Burmese enjoy chewing them so much because they are stimulating and have psychoactive effects. If you see local chewing it, you can easily notice their profuse red-colored saliva. Although it is a long tradition, the government has recently restricted the consumption of betel leaf due to health concerns.

In Myanmar, You Call the Waiter by Making Kiss Sounds

I personally find this fact the most interesting and I suppose other tourists would agree with me. So instead of calling, snapping fingers or raising your hand to get the waiter’s attention, the local Burmese would turn their head toward the waiter direction and make a few kissing sounds. I know it sounds weird and even discourteous, but that’s how it’s done in Myanmar. My advice for you is a wait to see if there is anyone else in the restaurant is doing it before trying yourself.

You can visit the Himalayas

Putao town, in the State of Kachin, is located in the foothills of the Himalayas up to the northernmost part of Myanmar. The Mount Phongun Razi, almost 3.635 meters (12.000 feet), can be reached from Putao. The trek is relatively easy to approach as it usually takes around 5 days to complete and no need for technical climbing or mountaineering experience.

Myanmar Wildlife is Rich and Diverse

Myanmar has vast areas covered in unspoiled jungles, which are a great source of preservation of wildlife. A lot of rare animals can be found in Myanmar, like tigers, elephants, rhinoceros, and leopards. Myanmar is also home to 28 species of turtles and tortoises, among which is the endangered Burmese roofed turtle, which was thought to be extinct. Significant efforts in conservation have successfully brought a number of rare species back to the path of recovery. 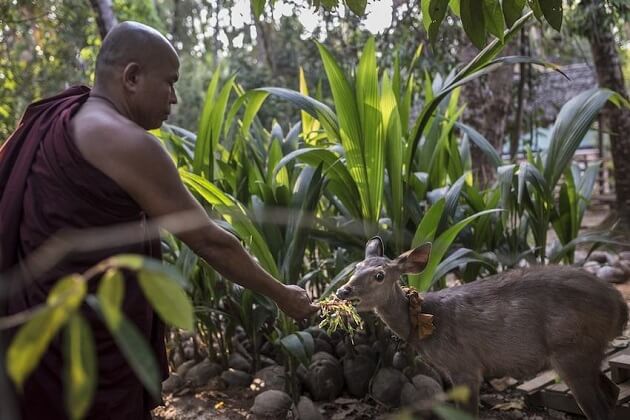 It’s very normal for you to see a thick layer of beige powder covering both adults ‘ and children’s faces while walking around the countryside of Myanmar. It is called thanaka, the Burmese traditional natural cosmetic made by crushing the leaves, timber, and roots of the thanaka tree that is then blended with a little water. It is very good for the skin as it has a cooling effect, provides sun protection and helps smooth the skin. No wonder why the Burmese have been using it for more than 2000 years. 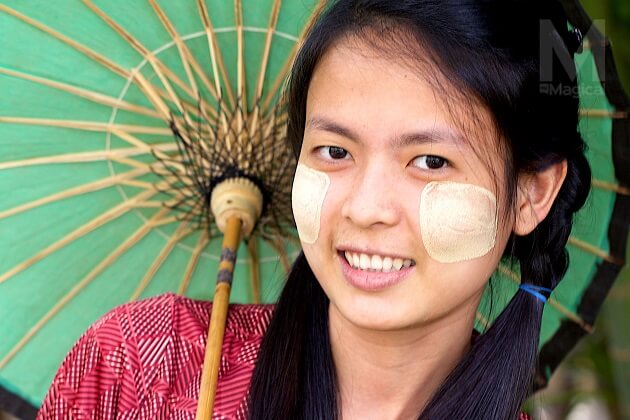 Chinlone – the Traditional Sport is More Than Just A Sport

The Burmese adore their national sport, called Chinlone. It is a non-competitive game where a group of 6 players working together to keep a cane ball aloft. The significance of this sport is the creative foot juggling that is sometimes described as the combination of sport, dancing, and martial arts. Chinlone is said to be dated back to more than a thousand years ago and was originally a form of performance to entertain the royalty. 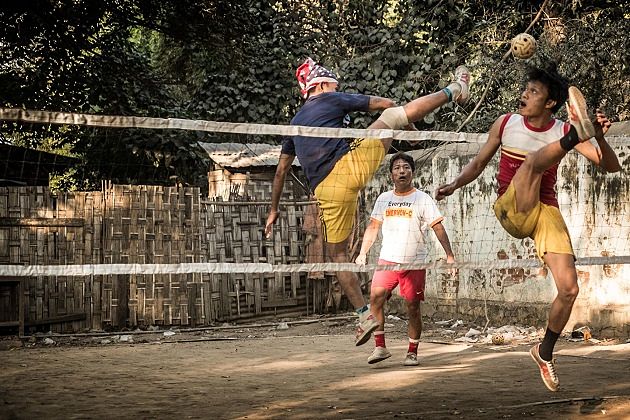 The Burmese Like to Carry Stuff on Their Head

When traveling around Myanmar, this is another interesting fact that I notice. The Burmese, especially women, would put the stuff they have to carry in a plate and place it on their heads instead of holding them in their hands. I was very surprised to see that and I reckon other tourists were the same. But this method is actually more convenient for them as they can use their hands for other purposes while walking. While in Myanmar, make sure to buy some snacks from the vendors who carry a large plate of food on their heads. They are not only selling the food but also the traditional beauty of Burmese people. 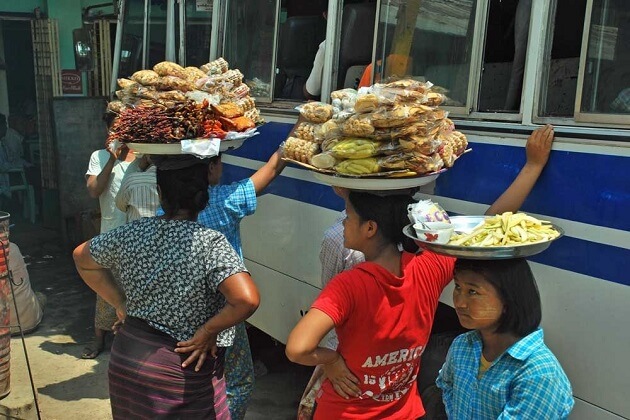 If you get the chance to visit Loikaw, the capital of Kayah State, you will see the famous Burmese tribes with long neck women. These women start wearing sets of rings to stretch their necks ever since they were little girls. They wear them all the time and as they grow up, they would gradually add more and more rings. This results in their impressive long neck and dozens of rings. Visiting other neighboring tribes, you can even see women wearing rings in the same style, but instead of on the neck, they would wear them on their arms or legs. 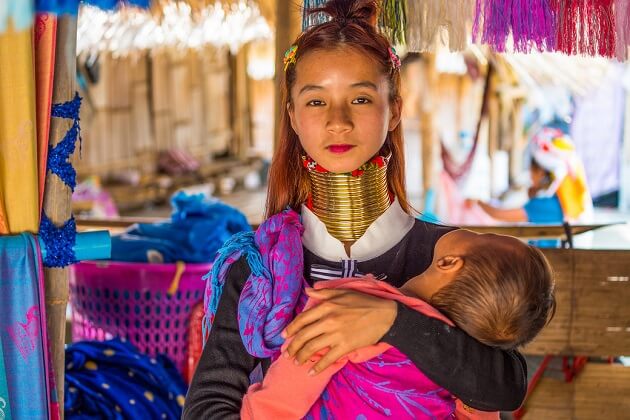 Things to Know About Culture And Life in Myanmar

Hundreds of years ago, the Burmese cats were considered sacred and raised in temples by monks. Later, they became royalty favorite pets and being kept in palaces. However, with the British colonialization of Myanmar, there was no one protecting the purebred Burmese cats. Until recently, their number has increased as they were introduced back to Myanmar from the US.

Fortunes And Magic are Serious Business

Burmese astrology originates from ancient monks and is still considered very serious by most Burmese nowadays. This has long been an essential part of life in Myanmar, with all important decisions must be consulted with an astrologist to see whether it is a good day to do it. Bad luck can be prevented by performing certain rituals under the instruction of traditional fortune tellers. There are rumors that a lot of big decisions or the construction of some pagodas in the country are the result of advice from famous astrologists.

Around the middle of April, the Burmese celebrate the Buddhist New Year with a festival called Thingyan. During which, they will pray, offer gifts to pagodas, dance, parade and of most excitingly, the water splashing. The Burmese believe that by sprinkling water over each other, misfortune and evil spirits will be washed away. 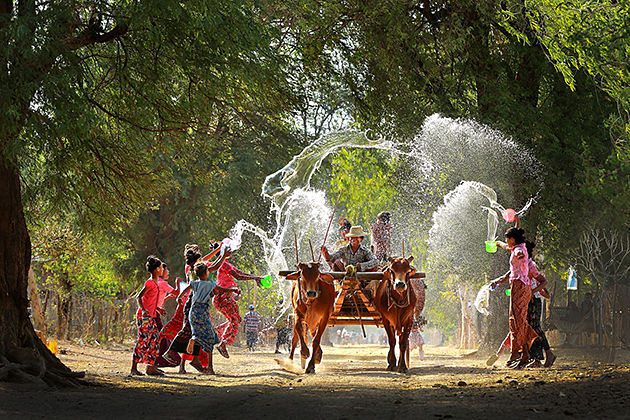 Myanmar Has Its Own Measurements and Time Zone

Though you can find some imperial measurements in Myanmar like the gallons for gas, mile for distance, the rest of the measurements are used only in Myanmar. For example, for weight measurements, the Burmese use “viss”, which is equal to 1.68 kilograms.
Time zone is another aspect in which Myanmar is significant. Instead of the normal intervals that include a whole hour, Myanmar’s time zone is 30 minutes apart from its neighboring countries. When you arrive in this country, change your clock in accordance with the GMT +6.30 zone.